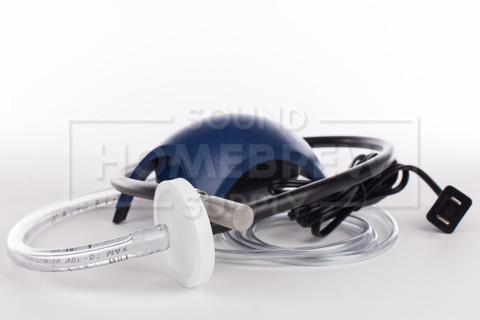 Instead of diffusing pure oxygen into your wort this system uses filtered air. The included air-pump pushes air through an inline sanitary filter which is then dispersed into the wort through our two micron threaded stainless steel diffusion stone. The advantage of an aeration system is that you never have to buy replacement oxygen tanks. The down side is that aeration takes longer than oxygenation. Because the atmosphere is only about 20% oxygen, the diffusion stone must be left running in the wort for approximately 30-120 minutes (however even 5 minutes of aeration is better than shaking the carboy.) There is no concern of contamination during this period, however you do have to monitor the fermenter periodically for possible over foaming. While you are brewing, this system can also be used to pre-fill fermenters with sanitary air. About the inline filters: There are two sides to the filter - an "in" and an "out". The direction you use doesn't matter, however, you want to take note of which way you first push air through it and always keep it that way. The filter should never get wet, so don't try and sanitize it by dunking it in sanitizer. To store the filter, use a little tinfoil on the "In" of the filter and store in a zip-lock bag.